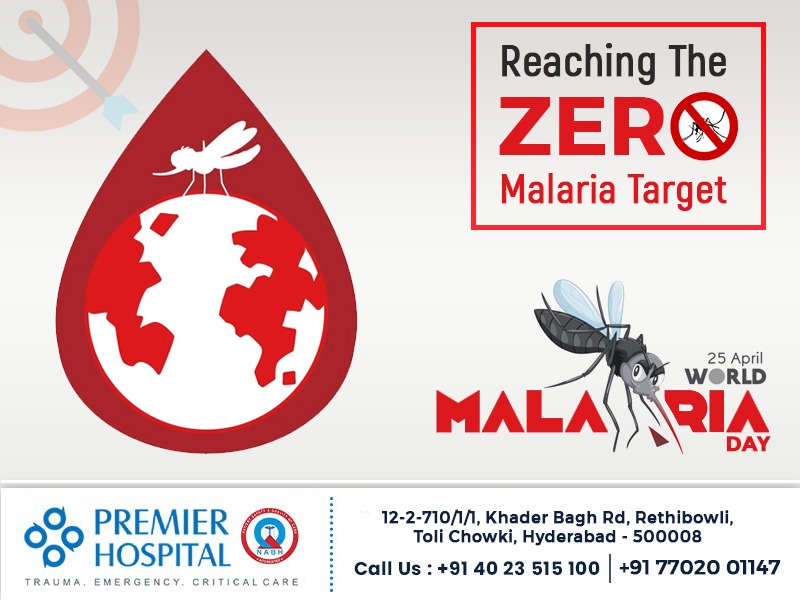 World Malaria Day is commemorated every year on 25th April, this annual event is organised worldwide, to raise malaria awareness and generate funds to treat patients and prevent malaria. The day highlights the need for various organizations and political intervention to control malaria. The day also marks the achievements gained against Malaria.

This malaria day is organised by WHO and its partners to honour the achievements of countries around the world that are supporting and achieving – elimination of malaria. They inspire other nations working to eliminate this deadly disease permanently and to promote the health of their populations.

This year the World Health organisation on malaria day came up with the theme, “Reaching the zero malaria target.” As part of social responsibility we, Premier Hospital, wants you to understand some facts about Malaria.

Malaria is one of the most life-threatening diseases caused due to a mosquito bite. It is transmitted when an infected Anopheles mosquito bites you. The infected mosquitoes release a dangerous parasite called Plasmodium into your bloodstream.

Once the parasite enters your body, they settle in the liver and mature there. After a few days, the matured parasites again enter your bloodstream and infect the red blood cells. Within 72 hours, the parasites multiply causing the infected red blood cells to burst open.

This results in various symptoms that occur in stages and lasts around three days at a time. Some of these include shaking chills, high fever, sweating, headache, nausea, vomiting, abdominal pain, diarrhoea etc.

The above are some of the facts about malaria. In the present situation malaria and COVID-19 became a dual-threat, many countries have made some major strides towards their goal of eliminating malaria by the end of this decade. In many countries, the number of malaria cases decreased to 97% from 2000 to 2020. In some countries, the deaths associated with malaria reduced to 99% in the same time.

We, Premier Hospital, ahead of World Malaria Day 2021, request all the leaders, health organisations & workers and global partners to work together for spreading awareness in a virtual forum to reach the target of zero malaria.