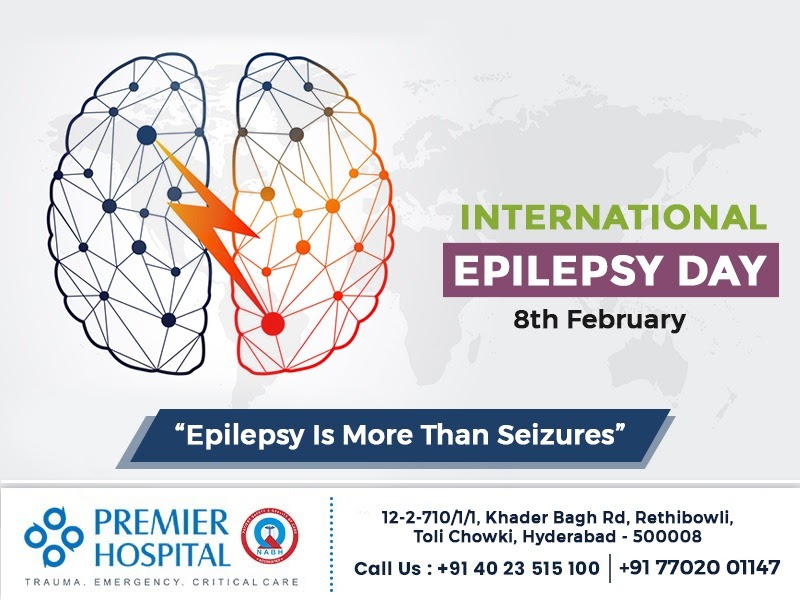 Children are the source of your joy and happiness and that’s why even the slightest disturbance to them cause great sore to their parents. One can imagine their situation when their young ones go through certain serious health issues.   For instance, seizures and epilepsy are one of the challenging health issues facing by many children.

Every year International Epilepsy Day is celebrated on the second Monday of February as a special event to promote awareness of epilepsy condition. More than 130 countries create awareness programmes each year. People all around the world join together to support and highlight the lethal problems facing by people with epilepsy, their families and caretakers.

Our epilepsy doctors at Premier Hospital, as a part of this awareness program educating people and making them understand the seriousness of epilepsy. If your children having any problems contact our specialist as soon as possible and save your children from suffering.

When there is an enduring predisposition of seizures it is called epilepsy. Simply, epilepsy is a brain condition which causes seizures. It is one of the most common nervous systems disorders. It can affect people of any age from children to adults of all races and backgrounds.

An epileptic seizure is said to be an abnormal electrical activity in your brain. It is a state of neurological activity that feels like a shock wave travelling through the brain and recurrence of these repetitive unprovoked seizures is called epilepsy.

A seizure is a  translate occurrence of symptoms resulting from abnormal electrical activity in the brain. People commonly think that a seizure means shaking moments of the whole body associated with fall, biting tongue and frothing.

But they can also exhibit as blank stares, shaking off one part of the body, falling suddenly, sudden jerks, abnormal sensation involving vision loss, hearing problems or with emotions like fear and laughter. A seizure can occur in a newborn to an older child.

Difference between seizure and epilepsy

Primarily, a seizure is a symptom whereas epilepsy is a disorder.  All seizure does not justify the definition of epilepsy condition. For instance, a seizure caused by low sugar, electrolyte imbalances etc. would not be labelled as epilepsy. If two or more seizures occur without clear reason within 24 hours, it is considered as epilepsy.

Seizures can affect a person due to various reasons. Some of the common reasons are acute causes like infection, electrolyte imbalances, low sugar levels, head trauma, drug ingestions, herbal medications which contain camphor,  eucalyptus oil etc. They can also be familial and genetic.

Seizures among children are of different types. The common types include:

Quite often, syncope/fainting are confused with seizures. Preceding events, investigations can clarify what it is exactly. Similarly, Vertigo/dizziness can also be confused with seizures especially in children as they cannot explain their symptoms. When it comes to older children, psychological factors also need to be considered in diagnosing the condition.

Like any other condition, life-threatening events are managed first and if the child is still seizing medication would be given. After stabilizing the child blood test are done to evaluate sugar level, electrolytes, ineffective markers as required. Electroencephalogram (EEG) and brain imaging like CT scan and MRI for the brain is done based on the clinical scenario.

Drugs used to treat and prevent seizures are called antiepileptic medications and they are prescribed depending on the type and cause of seizures. For acute causes usually, the treatment is of short duration. For other infrequent and age-dependent epilepsies treatment can be stopped after 2-3 year seizure-free period. However, a few serious epilepsy cases might be required lifelong treatment.

When medications and other therapies fail to improve the condition of seizures, Epilepsy surgery will be the next good option. The surgery involves extracting a small portion of your brain that cause seizures.

It is a frightening experience for any parent to see their child seizing mainly because of the uncertainty of the event, long duration of medication intake and social stigma. Long term results and recurrence depends on the underlying cause of the condition. In most of the acute cases, the chance of recurrence is low. With good and timely treatment in age-related epilepsies, children would be rendered seizure-free. In the era of continuously improving medical care and awareness, we can always minimize the effect of epilepsy on these young growing minds.