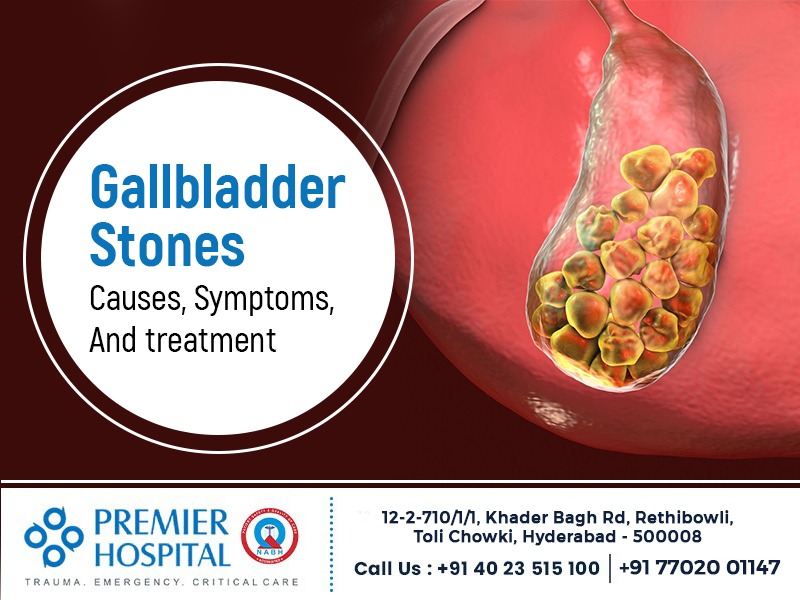 Gallstones vary in size; they can be roughly formed from the size of a sand grain to as large as a golf ball. For some people, their gallbladder could contain just one gallstone, while for others, there could be more than one.

Gallstones may go undetected because they do not cause discomfort until they clog the bile duct and cause pain. If you are in unbearable pain, get medical attention immediately. However, in some conditions, gallstones do not generate any symptoms which might not require medical attention, based on the doctor’s advice and guidance.

Gallstones might be formed when the chemicals like cholesterol, calcium bilirubinate, and calcium carbonate in the gallbladder are out of proportion.

If the gallbladder is not emptied on a regular or appropriate basis, bile can get concentrated, resulting in the formation of gallstones.

Gallstones are classified into two categories.

Cholesterol Gallstones – When there’s too much cholesterol in the bile juice, cholesterol gallstones can develop. They are the most common form of gallstone.

Pigment Gallstones: These gallstones arise when the bile contains an excessive amount of bilirubin. They are more prevalent in persons who have liver problems, diseased bile ducts, or sickle cell anemia (blood disorders).

Experts are unsure why some people acquire the chemical imbalance in their gallbladder that leads to gallstones.

On the other hand, Gallstones are more frequent in obese adults, particularly women. According to one research, having a waist circumference of 36 inches or more nearly doubles a woman’s odds of acquiring gallstones and needing surgical intervention to eliminate them.

Some other risk factors that cause gallbladder stones include:

Women are more likely to develop gallstones than men. In addition, men who intentionally lose and gain weight rapidly are also at higher risk of developing gallstones later in life.

Most of the patients with gallstones have no symptoms at all. This is due to the fact that the stones remain in the gallbladder and create no complications.

On the other hand, it can sometimes cause cholecystitis (inflamed gallbladder).

The predominant symptom of gallstones is pain that appears unexpectedly and rapidly worsens. This discomfort is most commonly felt on the right side of the abdomen, immediately below the ribcage, along the shoulder blades.

Some other symptoms include:

You may observe passing stools in clay-color and urine in the dark, tea-color if the severity of gallstones increases.

ERCP is a unique method as it involves diagnosing and removing stones from the gallbladder. It can also be used to identify abnormalities associated with the pancreas, bile ducts, and liver. In the ERCP technique, an endoscope is used to remove the gallstones. It’s a flexible tube with a light at the tip and comes in the size of a pen. The doctor inserts a flexible tube into your mouth and then guides it into your stomach to reach the small intestine to check for stones that are obstructing the bile ducts.

Laparoscopic gallstone removal is equally safe as endoscopic gallstone removal. The goal of this minimally invasive surgery is to remove stones that have been trapped in the gallbladder. The treatment entails creating a tiny incision and inserting a laparoscope (flexible tube) with a camera and light at the tip into the duct to accurately see and remove the stones. The stones are entirely removed by introducing other surgical tools.

One can, however, always regain control over their health. The same applies to people who already have gallstones. Some of the precautionary measures one can take to avoid gallstones are – never avoid or skip meals, maintain an ideal weight, consume a diet rich in fiber, if you are overweight, reduce it and keep your body fit.