Everything you need to know about Endometriosis 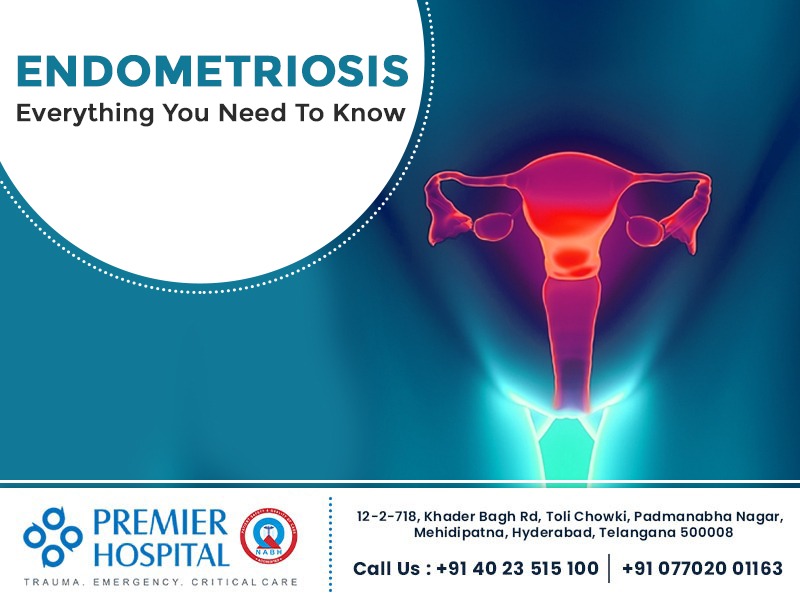 Our body functions are often a mystery. Every muscle pull and a cramp is like a reminder given by your body to the brain that you need to take adequate care of yourself. Every human is bound to get such reminders, whether you are male or female.

However, female bodies are more vocal about it, and endometriosis is one of these painful reminders. It is a painful condition in women where the cells similar to the cells in the endometrium grow outside the uterus. What is the endometrium, you ask? The endometrium is a tissue layer that lines the inside of the uterus and is associated with the bleeding that occurs during the menstrual cycle. In abnormal situations, it develops on the:

Medical surveys state that this condition nearly affects 3 to 10% of women of reproductive age. To diagnose endometriosis, you have to watch for the following symptoms.

Unusual pelvic pain during the natural menstruation process is an indication that it might be endometriosis. Usually, women experience some pain during periods, but women with endometriosis say that menstrual pain is higher than usual and even increases with time.

Other symptoms of this condition include:

The cause of this painful disorder is often a mystery. However, here are some of the reasons that lead to endometriosis.

Immune system disorder: Your body’s immune system fails to detect and destroy the endometrial tissues growing outside the uterus.

Retrograde menstruation: In this condition, the menstrual blood which carries endometrial cells flows back into the pelvic cavity through fallopian tubes instead of flowing out of the body. These endometrial cells might stick over the pelvis walls or to the surface of other pelvic organs. Later they grow into a thick mass of tissues and bleed during every menstrual cycle.

Peritoneal cell transformation: Experts call it “induction theory,” where the hormones or immune system promote the transformation of coelomic cells and peritoneal cells (the cells that line your inner side of the abdomen) into endometrial-like cells.

Scar endometriosis: Endometrial cells may attach to the surgical incision after a hysterectomy or C-section, which may lead to “Scar Endometriosis.”

There are specific risk factors that may lead to endometriosis, which include:

If endometriosis is left untreated, it can disrupt your life. However, with good treatment, the symptoms of endometriosis can be managed. Medical and surgical treatment options are both available to manage symptoms and any other potential complications. The doctor would initially suggest conservative treatment. If the condition doesn’t improve, then they may recommend surgery.

Pain medication: The doctor might suggest taking pain relievers like NSAIDs or ibuprofen, or naproxen sodium to ease painful menstrual cramps. They are not effective in all cases and you might have to move on to other treatment options mentioned below.

Hormone therapy: Taking hormonal supplements can help relieve pain and prevent the progression of endometriosis. Hormone therapy can regulate the monthly hormonal changes in your body that promote the growth of endometrial tissue.

Gonadotropin-releasing hormone (Gn-RH) agonists and antagonists: These GnRH drugs help prevent the production of ovarian-stimulating hormones; it reduces your estrogen levels and prevents menses. This leads to the shrinking of endometrial tissue.

Conservative surgery Conservative surgery is suggested for women who seek pregnancy or experience severe pain or if the hormonal treatments aren’t effective. This surgery aims to remove the mass of endometrial growth without damaging your reproductive organs. It involves laparoscopy, a minimally invasive surgery that helps to diagnose and remove endometrial tissue.

It is the last-resort surgery to treat endometriosis suggested when other treatments don’t improve the condition.

During a hysterectomy, the surgeon removes visible lesions along with the uterus, cervix, and ovaries as they make estrogen, which stimulates endometrial tissue growth. After a hysterectomy, you cannot become pregnant. So it is usually preferred in women who have completed their family.

Knowing the above risk factors, taking ample care and seeking appropriate help early can help diagnose and treat endometriosis. At Premier Hospitals in Hyderabad, our gynecologists are well-versed to treat endometriosis and educate you about this and other diseases or disturbances related to your menstrual cycle. Early diagnosis and timely treatment for endometriosis can prevent various complications. Call 7702001163 to book an appointment or know more.