Door to Needle Time An Overview 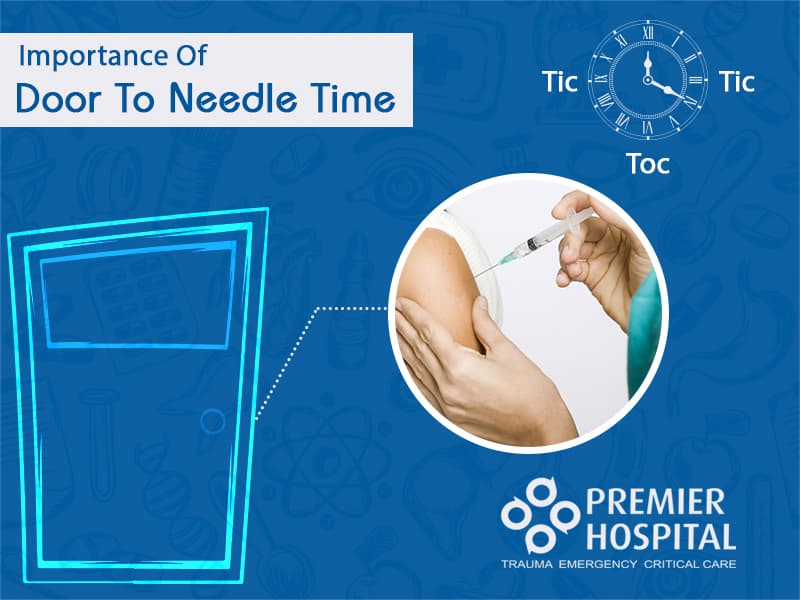 Heart attacks have always been one of the most common and lethal problems patients have to incur. The treatment for a heart attack needs immediate attention to help the survival of the suffering patient.there is a time gap of 60 mts before permanent damage occurs to the cardiac muscle.

This period is called the Golden Period. When the patient arrives to the hospital, as per the urgency, he should be evaluated by concerned doctor and treatment started at the earliest. This time between the patients arrival, to starting of treatment is called Door To Needle Time. The more efficient the hospital, the less is the door to needle time.

About three-quarters of patients suffering a heart attack are administered with thrombolytic drugs, within 30 minutes of entering the hospital. The hospital themselves have set the target and the overall time for managing those drugs is reported to be 60 mins from the time of the distress call made for the patient.

Thrombolytic drugs are essential as it aims to reduce mortality rates, especially with cardiac problems, which is one of the major causes of deaths worldwide. There have been substantial results generated from this idea of door-to-needle time.

Door-to-Needle time is defined based on multiple parameters, including the severity of the heart attack. Patients often call for help, and it is the hospital’s estimate afterwards to determine a quick turnaround time and follow it up with administering the necessary life-saving medication to the concerned patients.

Otherwise, the standard time medical associations and hospitals believe in would be somewhere under the 60 minutes mark from the time of the distress call. The specific timeline is set considering the fatality involved mostly with cardiac arrests but also with a stroke. Anything beyond that would be regarded as a delay and thus increasing the chances of death for patients. Hospitals around the world have worked towards reducing the standard DTN time over the years and have seemingly achieved brilliant results.

Many hospitals around different countries have tried effective ways to change the way they react to distress calls for susceptible problems like a cardiac arrest and felt the need to administer thrombolytic drugs is essential to save a life. To create more efficient, many hospitals have set their own time to respond to emergencies and thus to improve the much-maligned fatality rate that grips fear into patients at the thought of a cardiac problem.

Problems with Door To Needle time in Indian cities:

Cities in India like Bangalore, Mumbai, Hyderabad or Chennai are seemingly congested when it comes to reaching out to the patient and responding appropriately.

The Door-to-Needle time could and in most cases would be extended due to the problems in transportation or reacting to patient promptly due to the overpopulation of hospitals in most parts. Hospitals with better management and skilled personnel will be focused on managing the DTN time better and thus help patients in need more efficiently.

It is said that the door to needle time is supposed to be the ‘golden period’ of the treatment as within one hour since the time of the attack, a person suffering from a stroke or heart attack NEEDS to be treated.

Heart attacks are widespread and so is a Stroke, but the mortality rate with cardiac diseases are much higher and one of the primary causes of death in India or anywhere around the world. Door-to-Needle time emphasizes the quickness the healthcare team needs to be efficient and efficiently reduce mortality rates due to myocardial infarction.

Although the problems of congested cities persist in Asia, especially in Indian towns, hospitals or medical associations need to combine well to determine the better management of patients when it comes to suggesting door-to-needle timelines for effective treatment of patients.

Since the inception of Premier Hospital in 1991 till today, we have grown to unprecedented levels, due to our excellence in medical sciences and healthcare. Premier Hospital is the creation of Dr Mahesh Marda and when it was first established, was only a small, 30-bed hospital facility. Back then, we provided only secondary care to patients, but that certainly has changed in the present landscape