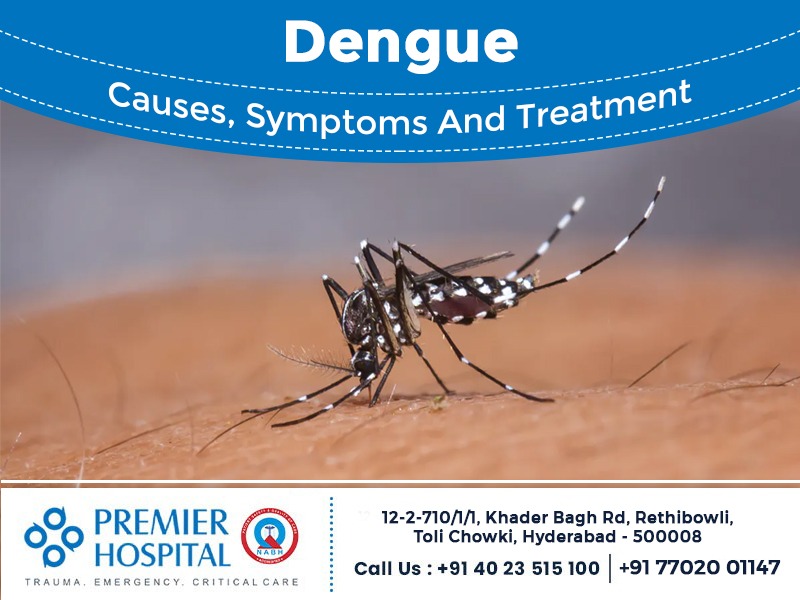 Dengue is a fever caused by one of the four dengue viruses and it is transmitted by the female mosquito species Aedes aegypti and Aedes albopictus. Dengue is more common in tropical and subtropical regions which are spread in more than 100 countries. An individual with mild dengue fever will have flu-like symptoms and a high fever. When the disease is severe, it is called dengue hemorrhagic fever and it has the ability to cause bleeding, an abrupt drop in blood pressure and death.

This viral fever is seasonal, as the dengue cases tend to increase in certain climatic conditions.

What are the causes of dengue?

When a mosquito bites an infected person, the virus infects the mosquito. first. When this infected mosquito bites a healthy person the dengue virus enters into the bloodstream and causes infection. Dengue cannot be transmitted from one person to another. These mosquitoes breed in muddy stagnant ponds. One bite of a mosquito is enough for a person to get infected with the virus and to fall sick for days. Only certain species of mosquito carry the infection.

These mosquitoes are mostly seen during the daytime because they become active approximately two hours before sunrise and stay active until sunset. Their bites are very aggressive during the daytime. The dengue virus shows its effects after four days of a mosquito bite. It can be diagnosed through blood tests.

Following recovery from dengue fever, your body is protected from the type of virus you were infected with; you are not immune to the other type of dengue viruses. In other words, you are susceptible to infection caused by the other three types of viruses in the future. The risk of severe dengue fever increases if you get infected with the dengue virus again and again.

What are the symptoms of dengue?

The symptoms of a dengue infection often do not appear for a long time in the beginning. It is possible that symptoms may be mistaken for other diseases like the flu and usually, they begin around four to ten days after a mosquito bite. An individual with dengue fever will experience high fever (104 F (40 C)) and the following symptoms:

The symptoms of a viral infection are sometimes mild and misdiagnosed as flu or an infection caused by another virus. The infection is typically milder in young children and people who were never infected by the virus. However, some serious complications can develop which include dengue hemorrhagic fever (DHF). The symptoms of this rare complication are characterized by:

In the case of severe DHF, severe bleeding may lead to shock or even death which is often termed dengue shock syndrome (DSS). It is associated with symptoms like intense stomach pain, sudden drop in blood pressure, heavy bleeding, blood vessels leaking fluid etc.

Dengue hemorrhagic fever is believed to be more common among people with weakened immune systems and those who have been infected with dengue twice or more.

There is no permanent cure for dengue because it is a viral infection. However, treatment can help to manage the symptoms depending on the severity of the disease.

High fever and vomiting dehydrate the body, so drink more fluids. Medication such as Tylenol or paracetamol can help with pains and fever. In severe cases intravenous (IV) fluid supplementation is suggested when the patient can’t take fluids through the mouth. Blood transfusion can also be done in patients with severe dehydration.

Dengvaxia is the only dengue fever vaccine approved and given in areas where the fever is more prevalent. It is given to people ages 9 to 45 years with a history of dengue at least once. Three doses of the vaccine are administered over the period of 12 months.

Prevention is better than cure

The most effective method for preventing the spread of dengue fever is to avoid mosquito bites by controlling the mosquito population around you. Here are some tips to be followed:

Always keep your surroundings clean. Do not leave excess water in the plant pots. Don’t give mosquitoes a chance to breed in your surrounding areas. Even when you are outdoors, wear full sleeves shirts and pants that will protect you from mosquito bites. Perfumes and soaps with strong scents may attract mosquitoes, so better avoid scents.

If you are suffering from a high fever, consult a doctor immediately. Don’t neglect it. To know more details consult our specialist doctors at Premier Hospital in Hyderabad.