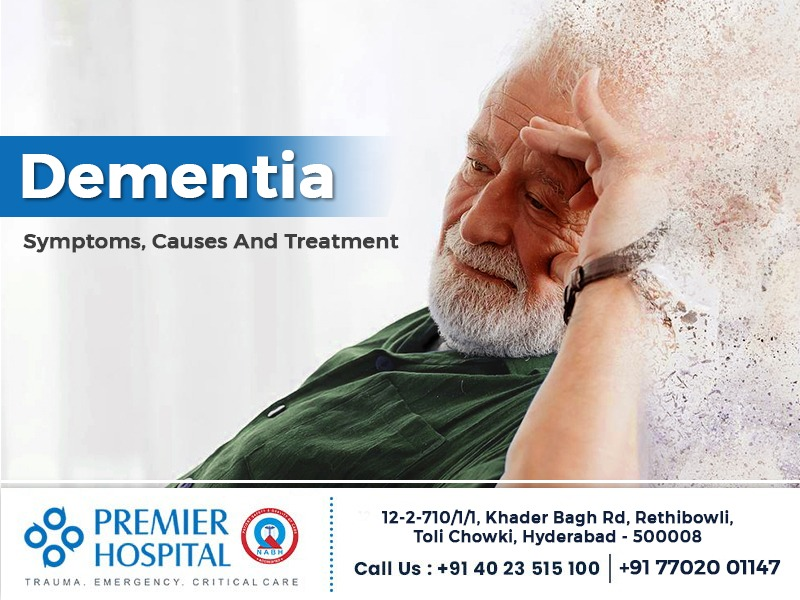 Dementia is not a single disorder; it is a collective term for a group of disorders that lead to a decrease in cognitive function, meaning the ability of a person to remember and respond appropriately to situations around them. It includes a wide range of medical conditions such as Alzheimer’s disease and Stroke.

Dementia is defined by a group of symptoms that include memory loss (cognitive decline), inability to think and various other problems associated with the brain that severely interfere with our daily activities. It is an underlying cause of other disorders related to memory that affect behaviour and feelings also.

Nearly 60-80% of Alzheimer’s disease cases lead to dementia. Vascular dementia is the second most leading disorder that causes dementia. People who are experiencing brain changes multiple times might have mixed dementia. There are many other health conditions that result in reversible dementia, which include thyroid problems and vitamin deficiencies.

The symptoms of dementia vary based on the cause; if you notice any of the following symptoms, consult a doctor immediately:

People might also experience psychological changes like depression, anxiety, hallucinations etc. Many of these conditions are progressive; the symptoms start slowly and get worse with time. If you or anyone you know is having memory problems or any other changes in their behaviour, never ignore to consult a doctor.

The brain is classified into different regions, and each region is responsible for distinct functions. When cells are damaged in that particular region, the functions of that region get affected. So, depending on the damaged area, every individual with dementia is affected with different symptoms.

Some diseases pretend to look like dementias, which are caused due to medications or vitamin deficiencies. They might be reversible with proper treatment.

However, certain types of dementias are not reversible, such as:

Alzheimer’s disease: It is the most common reason for dementia. In Alzheimer’s disease, high levels of protein deposits inside and outside the nerve cells damaging the functions of brain cells and their communication. Eventually, it leads to dementia.

Vascular dementia: Next to Alzheimer’s, this is the common type of dementia. It is caused due to damaged blood vessels which supply blood to your brain. Blood vessel problems can damage the brain in many ways. Loss of problem-solving skills reduced thinking, lack of focus and planning are the most common symptoms of this condition.

Lewy body dementia: It is a neurodegenerative condition caused due to abnormal balloonlike clusters of proteins formed in the brain. This is another type of progressive dementia.

Mixed dementia: Some studies on older people’s brains with dementia indicate that two or three types of conditions like Alzheimer’s disease, vascular dementia and Lewy body dementia occur at the same time. It is termed as mixed dementia.

Frontotemporal dementia: This is popularly known as Pick’s disease. This is a condition where a group of diseases degenerate the nerve cells and their connections in the brain. It usually affects the frontal and temporal lobes of the brain which are responsible for personality, behaviour and language.

Huntington’s disease: It affects younger people of age 30 to 40 due to genetic mutation that causes dementia.

Traumatic brain injury (TBI): Head injury or trauma can also lead to dementia due to physical damage to parts of the brain.

Creutzfeldt-Jakob disease, Posterior cortical atrophy, HIV infection, Normal pressure hydrocephalus and Down’s syndrome are some other conditions that can also lead to dementia.

The treatment depends upon the cause of dementia. Reversible dementias can be treated with multivitamins and other drugs but unfortunately, most progressive types of dementia like Alzheimer’s don’t have a permanent cure. However, the symptoms can be managed effectively in many different ways.

Medication and drug therapy can improve the symptoms of Alzheimer’s and other types of dementia.

Cholinesterase inhibitors which include donepezil, rivastigmine and galantamine and tacrine, can boost the chemical messenger responsible for judgment.

Memantine is a medicine that regulates glutamate (chemical messenger) functions in the brain, such as learning and memory.

Following these techniques might reduce anxiety and provide a relaxed feel in people with dementia.

Over the past years, dementia has gained importance in the scientific community with researchers exploring the impact of various risk factors causing dementia and its prevention. To know more information about different treatment options for dementia, consult our expert doctors at Premier Hospitals in Hyderabad. Our doctors have helped thousands of dementia patients to lead happy lives.