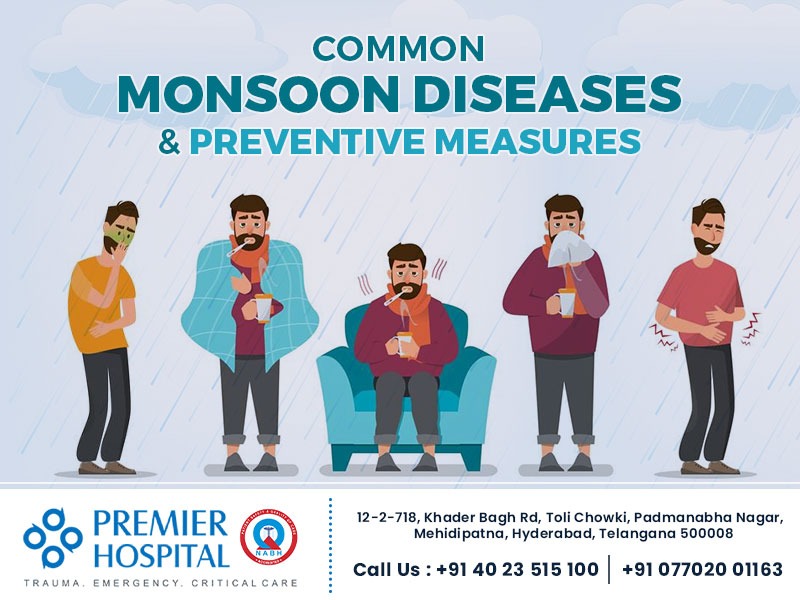 Every year monsoons bring a lot of relief from the burning heat of summers. But along with the pleasure, it also can bring various diseases. The risk of monsoon diseases is due to not keeping our surroundings clean and following necessary preventive measures.
Early diagnosis and treatment of these diseases can avoid unnecessary complications and decrease hospital stay. It may even make a difference between life and death. Our experts from Premier Hospital bring up some common monsoon related illnesses that are highly prevalent and which you should be aware of. We advise you to understand the necessary preventive measures that you and your family should take care of to avoid these diseases.

Popularly known as common cold or flu, is one of the most common monsoon diseases. It is a highly communicable disease as the virus spreads from one person to another through the air. It infects your upper respiratory region and affects your nose and throat.

Dengue fever is a dangerous disease during the monsoon caused by viruses that are transmitted through mosquito bites. It is spread by a mosquito named Aedes Aegypti with black and white stripes giving it the name “Tiger” mosquito that breeds in freshwater. Typically these mosquitoes bite in the daytime. If left untreated, it can become a life-threatening condition.

This is another common monsoon disease which is caused by certain mosquito species that breed in dirty water. As we know, waterlogging is a severe problem in many areas during the rainy season, and mosquitoes also get favorable conditions to breed. Malaria is spread through the female Anopheles mosquito.

It is a dangerous bacterial disease mostly observed in the monsoon season, but has thankfully become rare now. Cholera is caused due to contaminated food, water, and also poor sanitation & hygienic conditions. Cholera requires immediate medical treatment because it can lead to death within hours.

“Typhoid” is a highly infectious waterborne bacterial disease caused by Salmonella bacteria. It is commonly seen in the monsoon season, which is caused due to the consumption of contaminated food and drinking water.

Hepatitis A is another highly contagious viral liver disease. It is a waterborne viral infection caused due to the consumption of contaminated food or drinking water.

Symptoms Of Hepatitis A

Viral fevers are common throughout the year but are more prevalent in the monsoon season. They are highly contagious through air and physical contact and are mostly caused due to sudden weather changes.

It is also called as Weil’s disease or Rat fever and is caused by the Leptospira bacteria. The infection is generally transmitted through water or soil contaminated with the urine and feces of rats and other rodents, especially when one is walking through this water without covering their feet.