A Guide To Know About Cervical Kyphosis 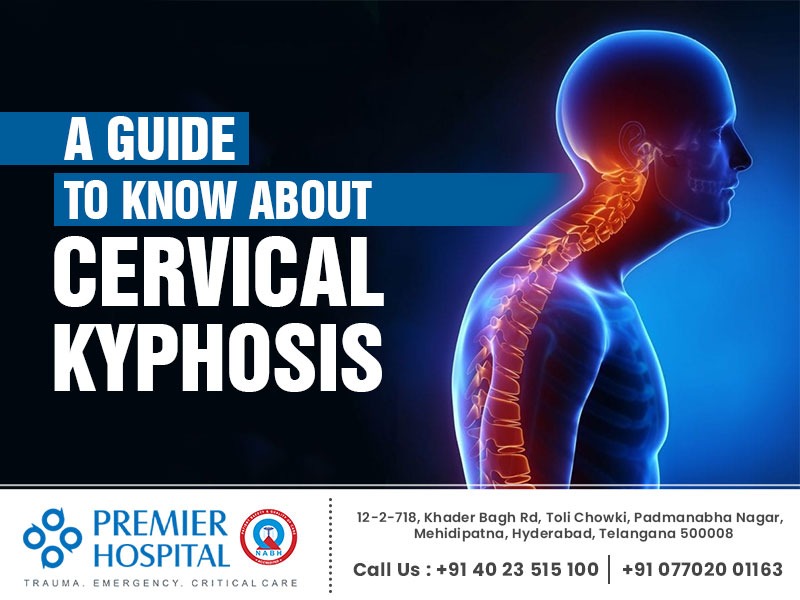 Many curves can be seen from the side of the spine. These curves work as a shock absorber and hold some weight from the body. Your spinal column is divided into the upper spine (neck), which is known as the cervical spine. The lower back is known as the lumbar spine, and it has inward curvature(lordosis). The thoracic spine, which is called the upper back, has an outward curve in general.

If the spinal curves grow more significant, it results in adverse health issues – the larger the curve, the more serious it will be your problem. Kyphosis is a condition of the abnormally-shaped cervical spine.

Both children and adults are prone to develop cervical kyphosis, and the causes are several. While sitting, working on your computer, or sleeping, poor neck posture is one of the main reasons for many cervical problems. However, some medical conditions also lead to cervical kyphosis.

Degenerative Disc Disease: It is the main cause of many Cervical problems in adults. Cervical discs degenerate with age, and the disc might collapse due to the vertebrae’s wear and tear. As a result, the disc becomes thin, and due to the head’s weight, it tilts forward, resulting in a curve outward. It progresses over the years and ends up as kyphosis, which is called Cervical kyphosis.

Congenital Defects: The defect presents at the time of birth itself, which is also called a birth defect or congenital disability.

Tuberculosis: Kyphosis might also develop as a result of cervical Tuberculosis(TB). TB also leads to spinal deformity and quadriplegia(paralysis). TB to the spine almost results in a kyphotic curve.

Cervical Kyphosis Due To Trauma: Trauma due to a car accident, a fall, or a sports injury can damage ligaments of the spine. The fracture might develop into cervical kyphosis. In severe cases, it may lead to spinal stenosis.

Iatrogenic Disorder: If cervical kyphosis is caused due to the failure of a medical procedure, it is called an iatrogenic disorder. Mostly it is caused due to an unsuccessful cervical spinal fusion surgery. Laminectomy can help to treat the disorder by creating space between the vertebrae.

Chin On Chest Cervical Kyphosis: Chin on chest syndrome is a kind of hyperkyphosis where the vertebrae of your neck form abnormal curves, creating a hump. In some cases, the curve extends beyond 50 degrees that can damage the entire structure of your spine.

If the muscles of the neck become weak, then it becomes difficult to straighten the neck. Along with the above causes, some other rare reasons can also lead to cervical kyphosis include spinal infections and spinal tumors. Radiation therapy for cancer in children around the cervical spine might affect cervical vertebrae progress in children. Eventually, it might develop cervical kyphosis in the future.

Symptoms of Cervical kyphosis vary from person to person and ranges from mild pain in the neck to a severe deformity. If the condition is left untreated, it may lead to paralysis.

In the case of moderate cervical problems, the defect can be managed with the help of physical therapies, a neck brace, and some medications. Experienced physicians can help to reduce pain, increase flexibility, and posture through physical therapy. Maintaining good neck posture while you work or sleep and applying ice packs, heating pads in case of discomfort is the first line of treatment options for cervical kyphosis.

You can avoid surgery if the progression of the curve stops and no signs of neurological problems. In such cases, it can be treated through standard conventional treatment options. However, if neurological issues still persist, even the cervical deformity stops progressing, surgical correction is necessary to fix the deformity.

Cervical surgery is a complicated procedure, so it is not suggested for simple reasons like just the deformity looking bad. After all, a spine surgeon prefers surgery to fix kyphosis by considering various factors like the rate of the curve’s progression, the severity of the deformity, and the discomfort it causes.

In some people, the kyphotic curve over-stretches and generates excess pressure on the spinal column. It might result in cervical myelopathy. Decompression surgery and spinal fusion help to alleviate pressure on the spinal column in such conditions. The damaged discs are removed to stabilize the spine. If a patient has cervical kyphosis along with myelopathy, it always needs surgery.

Severe kyphosis cases mostly need surgery to fix it, and over time, many innovative surgical methods have evolved. Spinal fusion with the combination “segmental instrumentation” is a popular surgical method to treat cervical kyphosis. Surgical for cervical kyphosis is a complicated procedure. It involves relieving pressure on the spinal column by an anterior cervical discectomy surgery and fusing the vertebrae to prevent the recurring of kyphosis.

If ankylosing spondylitis(AS) causes cervical kyphosis, then “osteotomy is the surgical procedure used to treat the condition. Chin on chest deformity occurs rarely, and treatment for this deformity is also complicated.

However, our spine surgeons in Hyderabad at Premier Hospital says that over the past decades, the surgical methods and the safety has improved a lot. Spine Surgeons are getting trained themselves to address complicated conditions associated with your spine. Dr. Chandra Shekar Reddy is one of the best spine surgeons in Hyderabad, who has many years of experience in treating complicated spine deformities. If you or any known person experiencing spine problems, consult our spine doctor before it is too late.